Kordan is one of three large islands linked together by an ancient and poorly understood portal system. It is home to two major cities, with Naphtali on the eastern coast and Indira near the western edge. Each city is built around one of the ancient portals. 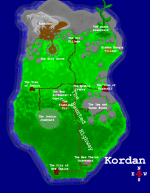 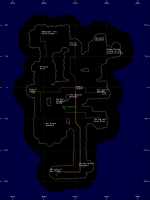 Kordan Trade Routes
The two major towns of Indira and Naphtali are shown in detail on this map. Also included are the locations of a number of villages and graveyards, as well as what little is known about the lost city of New Thalos.