Archais is the easternmost of three large islands linked together by an incredibly ancient portal system. It is home to two major cities, with Gad's Landing on the western coast, and Dragon Tooth to the east. A large mountain, likely an extinct volcano, resides in the center of the island, and the northern portion of the landscape is strangely flat and swampy. 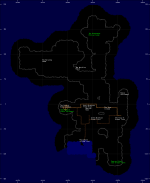 Archais Trade Routes
This trade route map focuses more on roads and trails and is intended for merchants, travellers, and caravans. As with all sanctioned trade route maps, its accuracy was only guaranteed for a short time after it was issued.

Maps for the Island of Archais: