The Road to Pellam

This quest guide was written by the player Ilex, and posted on March 19, 2009.

The recommended minimum for this quest is level 8.

After you have completed both the Sunlight Staff and Carver Shaman quests, Whelan will offer another quest: clearing the road to Pellam. This quest is quite a bit harder than the first two, and before attempting it you should complete the Pellam Graveyard Quest given by Sonja in the encampment. You can clear the road to Pellam first if you wish, but the graveyard quest will help ensure that your character is strong enough to survive.

Whelan will start the quest by telling you some backstory:


'As I told you before, our town was over run by an army of kobolds. They have set up a camp far off to the southeast of this encampment, blocking the path back to Pellam, and their otherwise loose troop is held together by their leader Uffspigot.

If you can eliminate Uffspigot, I believe it will cause enough confusion that they will disband. This should allow us to return safely to Pellam, or what's left of it.' 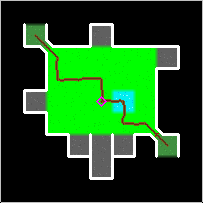 Head southward on the road, but look ahead for guards using the 'look' and 'scan' commands. For example, 'look south', 'look east', etc. Keep in mind that if it's night time, you might not be able to see unless you cast 'dancing lights' or 'throw' a candle ahead of you.

At the edge of the camp you'll meet one or two kobold guards. These should be easy to dispatch, as they don't bother to call for help. Inside the camp is more dangerous, as there are a lot of kobolds in close proximity and they tend to investigate nearby events.

It's a good idea to methodically go through the camp and dispatch all of the kobolds you find, one at a time. Retreat as necessary to the edge of the camp to rest and heal, but be aware that scouts and kobolds on patrol return from time to time and will reinforce the camp numbers.

Avoid Uffspigot and his two guards until the camp is clear! Once you've cleared the majority of the camp, it will be safer to attack Uffspigot. Should he prove too difficult for you, you should be able to safely flee without being ambushed by other kobolds in the camp.

After dispatching Uffspigot, make your way east then south to reach the town of Pellam. Once there, 'pray' at the Pellam town waypoint, then use the 'waypoint' command to return to the camp and inform Whelan. 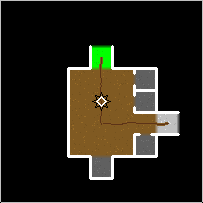 The Pellam Town Waypoint
Uffspigot is a priest of a dark god, and will cast spells both to heal himself and weaken attackers. Even so, when attacking Uffspigot, his two most deadly weapons are his two guards. The guards are substantially weaker than he is, but they do a lot of damage quickly.

Pace your mana and hitpoints while in the camp. Make sure you've got enough reserves to be able to escape should things get too rough. You may be able to hide and rest in one of the tents near the edge of the camp.

The pool near of the center of the kobold camp confers refresh on any drinking it. This can be very helpful for warriors and thieves using movement intensive combat skills.