This quest guide was written by the player Ilex, and posted on March 19, 2009.

The recommended minimum for this quest is level 6.

Before attempting this quest, you must have completed both the Sunlight Staff and Carver Shaman quests given by Whelan. To start the quest, go to Sonja the Healer in the encampment and talk to her. She will ask you to investigate the graveyards to the east:


'Kamrah has been reporting more and more undead to the east, and from my scrying I have determined there to be a great evil in the mausoleums of the graveyard. As you have shown yourself to be a powerful warrior, I would like to personally ask you to investigate, rather than involve Kamrah.

Please let me know what you find. I suspect much based on my scrying, and my magic has locked onto a small silver ring near the source. If you find the ring, please bring it to me for study.' 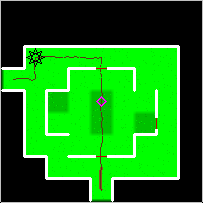 The Pellam Graveyard
To complete this quest, you will have to locate the graveyard east of the stony field, explore the crypts in it, and defeat an evil vampiress.

Starting from the large waypoint in the stony field, head eastward until you reach the far edge of the field, then go south once and east again. Along the way you'll meet hairy beasts and perhaps a few other nasties; any levels that you gain on the way to the graveyard will be helpful once you get there.

As soon as you enter the cemetary grounds, head for the north west corner and 'pray' at the cemetary waypoint. This waypoint is safe and you can use the 'waypoint' command to go quickly back and forth between the graveyard and the encampment.

Before trying the crypts, it's a good idea to circle around the graveyard and test your strength against the skeletons and zombies you find. You should be able to handle them fairly easily; if they give you a lot of trouble, kill them and the hairy beasts in the stony field until you gain a few more levels. The undead in the crypts are quite a bit tougher than the ones on the surface.

The Crypts and Mausoleum 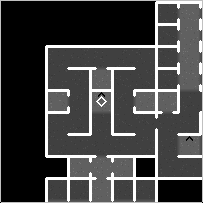 The West Crypt Entrance
When you're ready, go east five times from the cemetary waypoint, then go south three times. This will put you in front of the western entrance of the mausoleum. You may need to fight off skeletal guards before you can enter the mausoleum.

If you get lost, keep in mind that there are two entrances to the mausoleum, an eastern entrance and a western entrance. You can enter either one to complete the quests.

Just inside the mausoleum, before you head down into the lower levels of the crypt, is a safe area. If you get injured or low on mana, you can retreat up to that safe area and rest without worry.

The crypts are broken up into four major sections, with three bosses and one hidden treasure room. You don't have to clear out the entire crypt to complete the quest, but you will miss out on a lot of experience and good equipment if you only kill the vampiress and leave. Explore the crypts thoroughly, and feel free to loot what you find. There are several stone sarcophagi that may also contain equipment. Make sure to 'compare' what you find before using it!

The Bosses and Quest 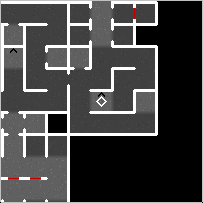 The East Crypt Entrance
The first boss, the Lord of Ghouls, in the southeast corner of the crypt. This boss is guarded by few ghouls, which can sap your strength by biting you. The Lord of Ghouls has the key to a treasure chest which contains several powerful items; you may find it helpful to get these items before confronting the vampiress.

The ghouls guarding the Lord of Ghouls are fairly tough. Be sure you can easily handle the skeletons on the surface before trying the ghouls, and be ready to flee if more than one of them gangs up on you.

The hidden treasure room is in the northeast section of the crypts, where there are many dormant raised skeletons. Be sure to search all rooms thoroughly for the entrance.

The second boss is in the southernwest section of the crypts. He is an ancient necromancer, lying dormant in his grave. You can wake him by using his cane on his sarcophagus. He may summon minions to help him, so be ready to take on more than one opponent.

The main boss, and the one you need to kill to complete the quest, is the Vampiress. she resides in the northwest section of the crypt, and is exceptionally difficult. Be prepared to flee, and if necessary you may want to bring along a friend or some healing potions.

Once you kill the vampiress, 'get all ashes' to retrieve the silver ring from her ashes, then 'recall'. Use the 'waypoint' command to return to the heavily guarded waypoint in the encampment, then give the ring to Sonja. This will complete the main quest.

Pretty much everything in the cemetery is aggressive. Watch out for large groups of creatures in one place.

The skeletons in the graveyard are a good index of how prepared you are. If you are having trouble here, you probably aren't ready for the crypt. The same holds true for the revenants, mylings, and vampire spawn of the crypt. If you're having difficulties with them, the vampiress is definitely too tough.

The mist creatures in the southeast section of the crypt give potions of the 'protection from evil' spell when dispersed. This protective spell helps greatly against evil creatures, sometimes cutting the damage they do in half. It's a good idea to kill a mist and use one of the potions.

However, when attacking the mist creatures, keep in mind that they are resistant to physical attacks. You may need to use magic or specially enchanted weapons to kill them. They also can sap your strength if you're in combat with them for too long. If you find yourself chilled to the bone, either 'recall' or retreat to the mausoleum entrance to heal and recover.