This quest guide was written by the player Ouch and the god Dentin, and posted on March 10, 2011.

The recommended minimum for this quest is level 9. 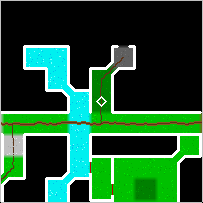 On The Suspicious Path
Your first clue about the temple comes from Uffspigot, the kobold leader, when you complete the 'Road to Pellam' quest. When you defeat Uffspigot, you'll find a charred note with what seems to be a secret codeword on it. Save this for later - you'll need to know the codeword to get into the temple.

The next clue comes from the scouting party of guards that have set up camp in Pellam. Once you get to Pellam, you should explore it and talk to all of the guards. They will tell you about some suspicious looking priests they met on the way to Pellam. Make sure to 'pray' at the waypoint in Pellam!

Now that you know roughly where the priests are, the easiest way to find them is to head eastward out of Pellam. Eventually you'll come to a bridge; just after the bridge, there is a suspicious looking path that leads north. Follow that path to the temple.

Once you're in the temple, you'll meet a Priest of the god Bobcat - at least that's what he claims. This is where you use the codeword from Uffspigot. Once you say the codeword, 'X', the priest will let you into the interior of the temple. 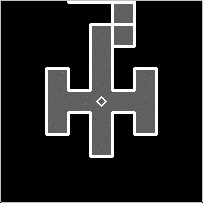 Near the Treasure Rooms
There are two small optional quests in the temple. It's usually a good idea to do these optional quests first, as the quest rewards, hints, and treasure can help you with the main quest.

The first optional quest is to find a famous explorer's legacy in the hidden treasure room. There's a lot of good equipment to be had in the treasure room, as well as a hint to get through the crushing walls in the main quest. To find the treasure room, you'll have to work your way through a maze of magically darkened false walls. You can find the first of these false walls near the dark elf's chamber.

The second optional quest is to free a wizard who has been magically imprisoned in the glass case in the secret room of the library. To find the secret room, search the library for a movable bookcase. You can do free the wizard by finding the enchanted glassworking mallet in the forge behind the laboratory, and using it on the case. 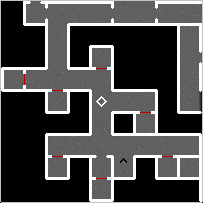 The Temple Interior
The interior of the temple is pretty big, and has a number of false walls and secret passageways. As you explore you'll find guard chambers and several creatures you might not expect. It's a good idea to explore what you can before taking on the main boss, as the clues and equipment may make it easier for you.

The main boss is named Remondadin, and she has her own private room hidden deep within the temple. Just to find her, you'll need to find the secret passageway in the laboratory, navigate through the crushing walls, and defeat her personal hobgoblin guard.

The most difficult part of this quest is the whirring machine with the crushing walls. As you move through the machine, the walls move closer and closer. If you don't pick the right path, you'll find yourself trapped and about to be crushed to death. When this happens, just 'recall' and you can try again. If you really get stuck, you can find a clue in the hidden treasure room on the east side of the temple.

Once you've gotten through the machine and defeated Remondadin, the main quest is over. There might still be other quests in the temple though, so make sure you explore everything!