This area building and design article was written by the god Draak, and posted on Nov 30, 2009.

I've always had a fascination with creepy stuff since I was a child. I watched shows like the X-files and Unsolved Mysteries whenever I could. I loved reading about alien abuductions, Big Foot and haunted houses. The Jeffrey Dahmer and John Wayne Gacy killings happened in the midwest, within a moderate distance from where I live. The horrible incidents were both revolting and captivating.

Recently, I've tried to take some of the essence of this fascination and distill it into building fodder. My first real attempt to make a completely horror-based area was the plane of elemental darkness. I recently restrung all the longs to try enhance the otherworldliness thereof. I actually pulled some of the demon concepts from a book idea my dad had been talking about writing for a long time. In particular, the Blok Sabats and their peculiar charateristics are directly from an idea my father had.

Since then, undead things and horrible happenings show up in the ruins near the Aztecs and Kookien as well as the Swamps of Sorrow and Q'thelas. One of the ones I'm most pleased with is Hennepin Canyon in the Desolation of U'ras. The swarms of undead skeletons at night with the appartions and dreams during the day give the region such a feeling of uneasiness.

The Making of the Ash Desert

The Ash Desert has been long in the making. It has its roots in an idea that Shadowfax and I had of a "Jo'Kerin Road" between Natchsburg (long before it opened) and Jo'Kerin. Heart displayed mixed interest in the idea, and it was placed on the backburner for several years. Subsequent events brought the idea to the forefront again, and Shadowfax and I were faced with a conceptual dilemma -- Jo'Kerin is older and more powerful than the comparatively young upstart Naginag Combine, which with its rapid expansionism would pose a serious threat to the Lich King. The two powers would eventually come into direct conflict, and an open road between the two would serve as a highway for armies to march down. The two would need significant obstacles to separate them, ones that would hinder both a highly adaptable, magically augmented force and a grinding, mindless army of undead that don't need food, water, air or shelter. It would need to be plausible that a small group, high level and specially prepared, could travel the route. We wanted the two nations to be locked in a cold war across a vast distance, fighting with political maneuvers instead of armies.

The Ash Desert would serve as part of this obstacle. An intermountain valley that had been devastated by a volcanic eruption, the Ash Desert is incredibly dangerous. The southern end would be covered in acidic lakes poisoned by volcanic ash, modeled after the soda lakes of central Africa. The middle portion is the actual magma flow, where a planar rift spews out hordes of fiery, aggressive elemental creatures. The northern portion is the most benign, a sea of ash dunes populated by aggressive crag trolls. Fire, acid and trolls would chew apart undead creatures marching through it as surely as it would murlocks and nagas. I decided that Jo'Kerin would probably have an outpost nearby, and so I made the ruined village in the magma fields (the first town I've built under the new mapping system, in fact). The monastery on the west side was built by the Order of Harmony, a monastic organization dedicated to neutrality and peace that Shadowfax came up with. We've been working on integrating it into various places the mud.

I designed the first level of the monastery to be benign, but obviously haunted. Players would encounter several strange events before having to fight any monsters. The idea was to build tension, mystery and also to give players the opportunity to leave if they found the enviroment too distrubing.

I wanted the Lich King's servants in the monastery to be unlike any other in the game. I went back to Eastern European mythologies, the birthplace of the modern vampire and the werewolf, to find suitable material. Most people don't know that vampires and werewolves split off from the same mythos. Shapeshifting, cannibalistic, post-human, night-bound creatures with specific weaknesses abound in the tales of this region. They are really the same, with origins in the strixes, stygian birds or streghes of ancient Greece. I found several variations of the streghe mythology and picked the aspects that best suited my purposes. The choice of streghes had other effects. They would have to have a Mother, so I had a suitable "boss" mob. The haunted monastery now had a more precise location, being less than half a night's travel from the lake of blood on the south side of Jo'Kerin, so the streghes would have a place to feed. Streghes would also be tough to kill, so I made some special effects for players to enjoy (hehe). These effects later got recycled in the form of my rabisus.

The mylings in the basement have an origin worth recounting as well. Mylings come from Norse myth, the spirits or possessed remnants of children that died of illness but later the idea of being unbaptized was attached to it. I just borrowed the name, really. Shadowfax once told me something he heard in Venezuela, about an old Spanish monastery that was being unearthed. In the basement they found a tunnel leading to the basement of a nearby convent. In the tunnel were tiny bodies, the remains of babies. It was apparently quite scandalous.

I want to point out that the mylings in the basement aren't meant to imply that those poor old Order of Harmony monks were doing something unseemly. They have coed monasteries and don't take vows of chastity. I placed the Midwife down there to convey the idea of it perhaps having been a birthing suite or an infirmary. I just liked the imagery of players poking around in an old tunnel, and hearing sounds in the walls, then suddenly having little tiny dead fetuses falling out of the ceiling on them.

Putting it All Together 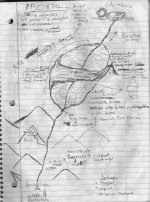 Most of Draak's areas
on the mud begin as an
early concept sketch
Recently, Dentin created a new mapping system and a new mapper, and the quest for world continuity/linearity began. It turned out that Jo'Kerin was actually just over the mountains from the Combine instead of being a vast distance away. There would be no room for the Ash Desert, let alone any of the other areas we were thinking of implementing between the two.

The Ash Desert was hastily pulled apart and put back together. It's north-south orientation became more east-west. It was placed north of the Salt Flats and Rud'Jali Desert (Ubar) and south of Jo'Kerin. It is (supposedly) surrounded by mountains on all sides, with a pair of narrow passes leading inward. It still serves as a buffer between Jo'Kerin and the Naginag Combine, though its positioning is different. The Jo'Kerin Road will eventually be opened, but it will instead be a narrow mountain road, with dangerous creatures watching over it, still unsuitable for an army to march through. It will not go directly to Jo'Kerin, just into the general region.

We will be adding more to the general area in the future. We are planning on adding more wilderness areas such as expanding the Elwood and adding some underdark. Our next project will probably be completing West Naginag, Ooahu and the Order of Harmony's monastery of Sutton Vu. This will complete the mainland infrastructure of the Naginag Combine and will allow us to start focusing our efforts on the capitol city of Naginag, across the Behr'rooj Channel.


We hope players will enjoy the work we put into the our areas.