The Old Gods of Alter Aeon

This page only has information about the Old Gods, who were present near the dawn of time. Only a few of these gods have survived the ages, having moved on to new worlds or ending up destroying themselves. The original gods were:

Dentin, implementor - He has been around since the beginning of time.

Wyvren - Wyvren has been around since almost the beginning of time. She now runs Banished Lands, the sister site to Alter Aeon. While the code bases are similar and being updated regularly, her MUD is beginning to take a decidedly different direction. Loki was one of the founding fathers, so to speak, and helped a LOT with the initial debugging when everyone else laughed at what had been done. Sometime in the summer of 1995 he hitchhiked through Canada, and ended up in the midwest somewhere. If anyone sees him, tell him that people miss him and wish he would write.

Kenai/Kremlin/Immortality - he is also one of the very first gods, and built several areas that are among the oldest in the game. Currently, he is on vacation, until something can be found for him to do.

Other gods include, but are not limited to:

Squeak - he is a fuzzy little guy who likes to squeak and wear Maxx's ties around the apartment. (both of 'em) He recently got Rob Hair(tm) so he looks nothing like the picture. Whatever you do, don't ask him about kiwis.

Vember - she's a bouncy one who likes to make cake and ramen, beware the day she combines these two. She is the goddess of all things fizzy and likes to yell in shrill voices about her rooms not saving from reboot to reboot.

Tempus - he is a cute immort type who is as often AFK as not. He has built several popular areas, and has more in the works. Be careful not to insult him, cause he has a mean streak a mile wide. Tempus is a real psycho, watch out for him...

Heart - he has been around for quite a while, starting his building career at Alter Aeon wallowing around in the mud with the nurglings. Not long thereafter he plagued the world with evil vile creatures, building an entire city of undead horrors designed to kill and maim wandering newbies and seasoned adventurers alike. Heart currently spends his time in front of a terminal in the heartland of America.

Charis - she is another of the older goddesses, her projects include the fishing village and Mt. Olympus to the north-east. Charis isn't around much anymore, but she does pop in from time to time to say hi.

Dancer - also known by some as the godfather, has built an astonishing 9 areas, most of which are among the more frequented in the mud. About a year ago he tried to destroy the mud, but he's all better now...

Fikh - creates particularly detailed and well conceived areas, including the Mud University, which he and Xael built. His building powers have been missed of late, as he has not been around much in quite a while.

Xael - is another awesome builder, putting a great deal of time into his areas, and it shows. Xael also has been MIA of late. The last thing we've heard was that he was busily working on his own mud code base. We wish him luck.

There are a lot more, but I don't have the time to install all the information at once. A little at a time...

Here is a picture of a few of us, all sitting on a stone bench at Wyvren's parents house in Maryland. 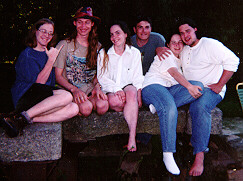 From left to right, the people are : Squeak, Dentin, Wyvren, Kenai, Vember, and Maxx.