This quest guide was written by the player Ilex, and posted on March 18, 2009.

The recommended minimum level for this quest is level 3. 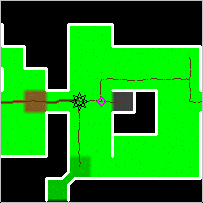 Near the Cave Entrance
The second quest Whelan gives you is to recover the sunlight staff. Whelan will tell you:


'Our town spellcaster, Stiboli, left behind a powerful staff imbued with sunlight when we fled Pellam. When daylight came, we realized that the enemy has a strong dislike for sunlight, but it was too late - our scouts informed us that the staff was taken into the cave east of here.

A demonic creature called Ahpuch now guards it. If you can rid the cave of Ahpuch and return the staff to me, it would help us with the defence of this encampment.'


To do this you must journey into the nearby cave, locate the staff, and return it. 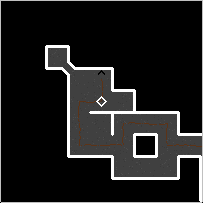 Just Inside the Cave
First, go to the stony field waypoint. If you haven't gotten this waypoint yet, you'll need to walk through the camp of the carver shaman (from the previous quest) to get to the stony field. When you're at the waypoint, 'pray' there to add it to your waypoint list.

From the stony field waypoint, follow the trail eastward until you reach the cave entrance. To enter the cave, type 'enter cave'.

To find Ahpuch, you must explore the cave system. From the cave entrance, go south, then west, then south to enter the eastern portion of the caves. If you go south once more, you should encounter an undead creature called Rawbone Gutcarver.

Watch out - Rawbone is a tough fight, but has a nice belt which can also be wielded as a weapon. He has a number of skeletal minions in the area, so it might be a good idea to circle around him to the east and hunt down his minions before heading south to attack him.

From Rawbone, work your way eastward, taking care of the skeletons and other creatures you might find along the way. The cave system splits for a time, but it quickly merges again, so any path eastward that you take will lead to Ahpuch. 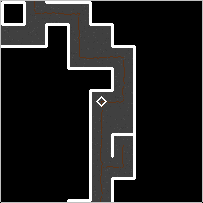 Beyond Ahpuch's Lair
About halfway through the cave system, you'll Ahpuch Lightkiller. He's a fairly tough fight, but probably not as hard as Rawbone. When he dies, he'll leave behind some boots, a key, and a small book. You'll need the key to get the sunlight staff. The book is interesting, but not needed for anything; you can 'drop' and 'sacrifice' it at any time.

From Ahpuch's cavern, you have to start heading south to go deeper into the cave system. The Sunlight Staff is hidden in a chest at the very end of the caves, near a small group of carver demons. The chest is guarded by a shambling mound. Once you have killed the mound, you can unlock the chest, open it, and retrieve the staff.

Once you have the staff, 'recall', go to Whelan, and give him the staff to complete the quest.

There are a lot of monsters in the cave, and underground movement is hard. You will probably have to rest or recall in between portions of this quest. The key is an object with a timer, which means you must reach the chest within a certain amount of time or the key vanishes. If you're unsure if you can go on after getting the key from Ahpuch, it may be a good idea to recall, regen, and then head back to open the chest.

Do not sleep in the caves if you need to recover movement. Use the 'rest' command to wait for your movement to recover. It's not as fast, but you won't be caught unaware in your sleep either.

Remember to 'sacrifice' corpses after looting them.

If you're a mage or cleric and you really want to keep the Sunlight Staff for your own use, you can still do the quest. Give Whelan the first staff that you get, then wait a little while, then go back to the shambling mound. The staff resets after a few minutes to allow other players to do the quest, and you can use the key to unlock the chest and get another one if you're quick.

There are seven primary types of creature in the cave system: