This quest guide was written by the player Ilex, and posted on March 18, 2009.

There is no recommended minimum level for this quest. 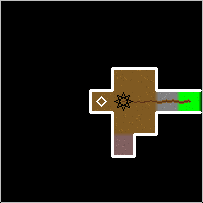 Whelan's Tent
Talk to Whelan the Ancient in the encampment. He will tell you the history of the encampment and why the Pellam townspeople are in it.


'Several weeks ago, a large band of kobolds and undead monsters destroyed our town Pellam. Those of us who survived fled here, but we can flee no farther as we are near the western end of this island.

Since that time, we have been almost constantly under siege by a horde of imps summoned by a nearby Carver Shaman. This shaman has set up camp in the nearby field, but we lack the manpower to assault him. If you could assist us in defeating him, we would be very grateful.'


By eliminating the shaman it will help make the defense of the encampment easier, and prepare you for the next quest. 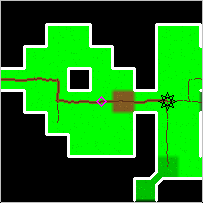 Just Outside the Carver Camp
From the heavily warded waypoint, go eastward and cross the stone bridge that leads to the field. Continue going eastward until your path is blocked by a large outcropping of rock. Go south around the outcropping and continue east. At the eastern edge of the field you'll find the camp, blocking the exit from the field.

When you find the camp, odds are good the shaman will be there. The shaman leaves occasionally to scout and receive orders; if he is not at the camp, you may need to wait for him to return. Instead of just waiting, feel free to loot the camp and explore nearby.

Once you have defeated the shaman, you will receive a message that you should inform Whelan the Ancient that the shaman is dead. The quickest way back to the camp is to use the 'recall' command. (You can also use the forward slash key, '/', to recall quickly.) Go west to Whelan and talk to him. He will congratulate you and give you your next quest.

You may stumble across chests while you are exploring the fields. If you find one, open it and take what is inside. These chests contain caches of useful equipment to help equip you and teach you how to use armor.

The field is occupied by large numbers of red-skinned imps, thorn beasts, and zombies. The zombies are not aggressive and can be avoided. The imps and thorn beasts are more aggressive and must be killed. It is wise to keep an eye on your hit points and movement and to 'recall' if you get hurt too badly (more than 20% of your total hit points). Get all from the corpses anything you kill. The imps have items that can help you.

When you are done looting corpses, you can 'sacrifice' them to get rid of them. The gods appreciate this, and will give you gold in exchange for sacrifices.